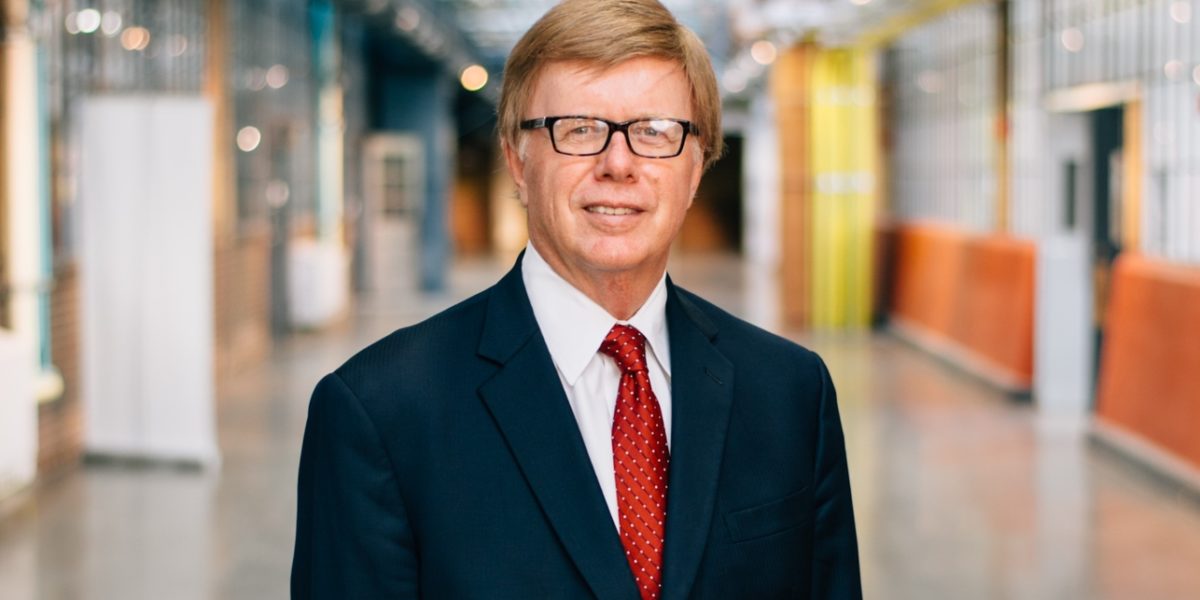 Marty Griffin, KDKA radio talk show host, and Bob Meeder, CEO and President of Pittsburgh Gateways Corporation, met virtually to talk about the Energy Innovation Center and its mission on Marty Griffin’s show on September 10, 2020. Listen to the full interview or see the transcript below.

Marty Griffin: There’s this insanely cool building on the Hill, right next to the arena. And when I pulled out, pulled up, pulled in, whatever, man, I got emotional. I thought of my dad. I think of my dad a lot. He went to the Connelley Trade School. Anyone out there go to the Connelley Trade School? That’s where my father went. I get in there, and I meet this man I’ve never met. It must have been- this might sound like an exaggeration to you, but once you kind of drill down- it must have been kind of like first meetings with Walt Disney back in the day. Because in this town, if you don’t know Bob Meeder, then you don’t know what I’m talking about, but he has this EIC, Energy Innovation Center that is just insane. They took Connelley Trade School, where my dad learned his thing, built his whole career around it. I think Bob’s dad went there too. And he turned it into this Disneyland of opportunity right here in the Burgh, and I had no clue, which makes me feel like a dummy but so what? I wanted to bring Bob into the conversation, I want to make this a regular segment, because I think, in fact, I know, we don’t talk about greatness in our town enough. We talk about despair and race and politics and Downtown sucks, and man, this Center rises like the sunrise over this city man. When you get in there, it takes your breath away. And I had to snag Bob, because he’s the guru, the legend. Good morning Bob, how are you?

Bob Meeder: Good morning Marty, how are you?

Bob: Yeah, it gives me chills too, every once in a while, while I’m walking down the hall. My dad went to Perry High School, and then he went to Connelley for a certificate in electronics. So, he was one of the 1,700 students that went there between 1931 and into the mid-80s. Then the student population started to wane as parents and school counselors were talking their kids out of going into the trades, which today ends up to be some of the most critical job needs not only in Pittsburgh, but throughout most of the cities in the United States. So, we’ve often talked about bringing Connelley back to the future.

Marty: This place is sick, it’s so cool. Everything from- what is it called, is it an ice factory, that cools the building, Bob? What do you call it?

Bob: Well, we have a lot of power generation equipment we’ve added to the building, and one of them was, we put in an ice farm in what used to be the Olympic swimming pool for Connelley. Every night the ice freezes, it takes about 6 hours, and every day we melt the ice and that turns into being able to support the air conditioning system for about 7 hours. It’s a pretty cool technology, not a new one, but one that’s very efficient.

Marty: Hey Bob, it’s like when we met, we were twin sons of different mothers, we were raised in the same home. Once we started talking, and this is why I find this so intriguing to me, at this EIC, you believe, you firmly believe in making a difference every single day, do you not, sir?

Bob: Yes. We designed the building and the programs to be annually recurring for the long-term. I’ve been a fan of yours, listening to your show for many, many years, and I know you have the same passion for jumping in and getting something done. That’s sort of the mission and philosophy of the Energy Innovation Center as well.

Marty: So, one of my boys that I grew up with in my neighborhood, Michael, just texted me, ‘I’m involved in the project in the old Connelley building. Exus Energy Management Company. We provide automation and video walls.’ So, everything you’re doing is taking the past into the future and giving folks opportunity. Right, Bob?

Bob: Yes, Exus is one of the premiere tenants there. We have many company and college institution tenants. I think they manage the largest windmill farm in the United States out of our building. By the time we got the space ready for them, they had already grown past the space and added about 18 new jobs. They’re now talking with Bill Miller, our facility manager, on expanding further. They represent a great example of the kind of future in energy that Pittsburgh should really lead. We’re proud to have them in our building.

Marty: Bob Meeder with the Energy Innovation Center, he’s very humble about this but my man raised all the money to build this facility that would blow your mind. Hey Bob, tell our listeners, because this isn’t just for big-brained guys that sit in front of computers, tell our listeners some of the opportunities you have, let’s just say in food service.

Bob: We installed a $2.2 million commercial kitchen about 3 years ago. It has the ability to produce 7,000 meals a day out the door. We were organized to develop a series of food production program all the way up through Cleveland, Erie, Meadville, all around the Pittsburgh area. Then COVID-19 hit and all of a sudden the groups that we were working with, all the restaurants up through that stretch, had to lay off their employees, I think some 84 people went out of work. So, we took the kitchen and in less than a few weeks turned it into a meal production center for free meals through the area. We work with retired Captain Jake Voelker, and we work with Chef Claudy Pierre, an African American chef that operated a site on the North Side. Together, they’ve produced in the last 7 weeks about 45,000 meals. We distribute them through 16 sites in the area, free, and we distribute through YMCAs and churches and women’s shelters and so forth. We’re looking to do that for the long-term. One of our star chefs, Claudy Pierre, is leading that effort right now. It’s not only for sending meals out the door, but also for training people in the volume production of food and helping companies who lost their business because of COVID-19 be able to sustain operations in the region. So, it’s been on example of us taking the building and making a quick right turn whenever COVID-19 hit.

Marty: This is Bob Meeder with the Energy Innovation Center. Hey Bob, you’re convinced, you’re a mission-based guy. You think at scale. Whereas I think, I’m going to put one ramp in, I’m going to raise $100,000 for a young lady whose daughter who was just paralyzed on a piece of machinery, but you believe in giving folks opportunity that gives them a career, not just feeding people, do you not, sir?

Bob: Yes, at the EIC Institute in the Center, plus we have, again, five post-secondary institutions in the building. Right now, they’re generating about 350 full time new jobs a year. The average enrollment there has been 85 percent minority, 61 percent heads of household, 100 percent unemployed. We do the training in concentrated sessions, so usually the training is about 6, 7 weeks, almost full time every day.

Marty: Hey Bob, can you hang around? We’re going to take a break. Can you hang with me man? This is great. You’ve got to listen to this, the opportunities there, and I want to talk to Bob about how you can get involved. Did you hear what he said? 100 percent of the folks they trained were unemployed, and they created almost 400 jobs a year. Pretty cool, eh?

Marty: He’s the CEO and President of Pittsburgh Gateways and the Energy Innovation Center, which used to be the Connelley Trade School. Like what Bob said, it’s back to the future. My father went there, his father went there. It gave my father hope, it gave him an entire career, and it did the same for Bob’s dad. Now, they’re giving hope to hundreds of folks. I hope people caught what you said Bob, about the diversity in the background. You want to give folks who did not have hope, a future, do you not, sir?

Bob: Yes. Our goal is full-time, family sustaining wages so that people can start a career rather than just have a job. That’s been one of the main missions of the whole project to transform Connelley in the first place.

Marty: Hey, how does someone get involved, sir?

Bob: Well there’s a number of contact points, it’s hard to go over all of them, but if you go onto our website, Pittsburgh Gateways Corporation or the Energy Innovation Center website, it’ll lead you the right contact people. The top three training programs there, among six or seven, we started the program that trains for all 18 building trade unions. That program is now being directed by the Master Builders’ Guild. They take in about 125 people a year. Again, no tuition fee, and they have literally been placing 100 percent of the graduates who complete the program. The training goes for just six or seven weeks. The second largest program is UPMC. We train for them for essential workers, and that’s through the EIC Institute program, so they’ll find that contact. There, again, they take in more than 200 students a year. They take them in groups of about 20, 24, and the programs are short circuited, because again, they have to be concise and tight because the people in the trainee program are heads of household and need to work quickly. And then there’s a number of other programs working with Partners for Work and others, for the banking industry, and so forth. We’ve always been corporate led. We try to start a program once a corporation approaches us and has an immediate need. We’re right now in the midst of some pretty exciting conversations for another part of our campus, with Letsche, where we’re going to maybe demonstrate some new facets in housing, all net zero energy. So, there’s a lot of opportunity emerging there, and the best is yet to come at the Center. It’s just beginning, I think, to capture its full momentum.

Marty: You’re my man. I want to be you when I grow up. Man, it’s unusual for me to be surprised and to be enamored with a process and the progress and a vision that someone actually carries out. We’re going to get a regular segment, I’m just trying to think of a quippy name, Bob, alright? Our dads would be proud, man.

Bob: Okay. Thank you for the time, Marty. I enjoyed meeting you and having you up [to the EIC] and met your colleagues. In fact, I’m reading a book one of your colleagues gave me on Tuesday on the future of work. We’re doing some pretty good work with Penn State University, called Nextovation, it’s a lot of interesting stuff. I’d be glad to talk to you again.

Marty: The thing is, I’m rarely surprised. And if you listen to him, and with all due respect to the food banks, and God bless them, what they’re doing is amazing, you pull up, they give you food, you drive away. What Bob does, and what they do at the EIC as they call it, they train you and create jobs so that you’re making the food. So that you don’t have to go to the food bank, because now you have a living. And they do it a couple of months. It’s beautiful stuff, beautiful stuff.