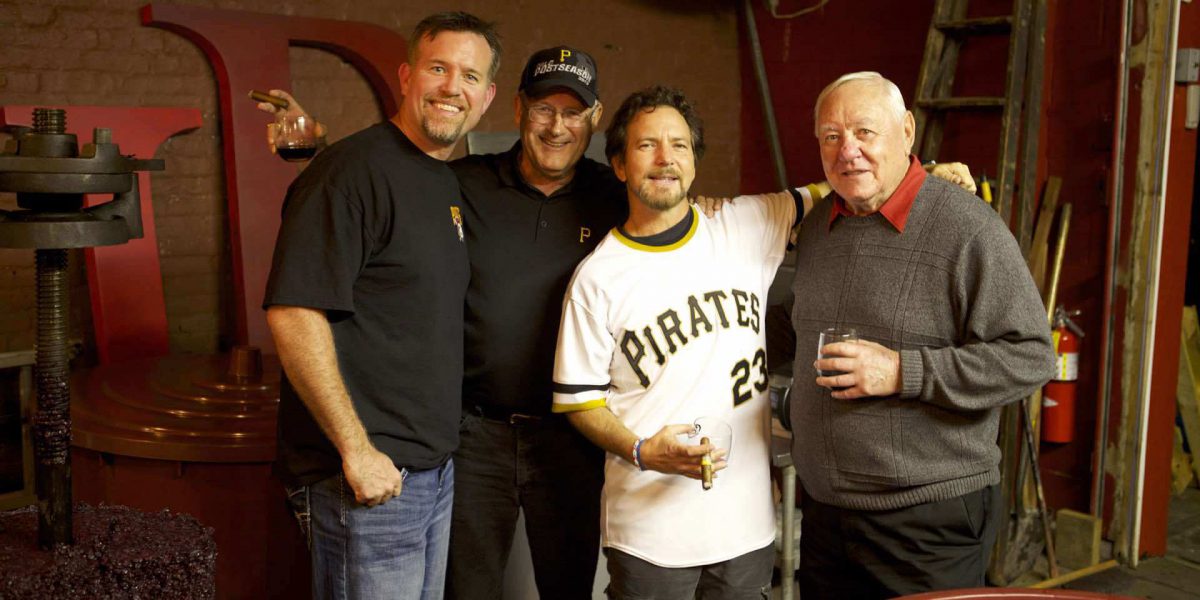 Thirty tons of grapes arrive in two seasonal shipments at the Roberto Clemente Museum in Lawrenceville every year. They’re unloaded into the cellar of the old Engine House 25, where they are turned into the museum’s sustenance.

Engine House 25 Wines is a business and the main fundraiser for the museum, which is dedicated to the life and career of the late Pirates’ Hall of Fame right fielder.

“It has saved us in the rough years and still does,??? said Duane Rieder, who owns the museum and the wine business.
He obtained his winery license in 2009. A street-level cafe, Arriba, is open to the public Thursday through Saturday, from 5 to 9 p.m. for wine tasting and bottle sales.

The heartbeat, though, is downstairs in the enormous, dimly lit, chilly, red-burnished, aromatic, subterranean man cave with fortress-like walls.

“I started making wine 24 years ago,??? he said. “I would put my photos on bottles as labels to get people to know about my studio. In 1999, I did a big mailing of bottles to ad agencies and people called back to buy the wine rather than to hire me as a photographer. It kind of backfired.???The building, which Mr. Rieder bought in 1994, was his photography studio for 10 years before he decided to display the memorabilia he had collected over the years of his baseball hero. Open by appointment only, the Clemente Museum fledged in 2006, and Mr. Rieder’s photography business “pretty much flatlined??? during the recession of 2008-09.

But the experience led to his a-ha moment — wine could be his next business.

The public can buy bottles at Arriba or by calling or emailing. Barrels that live at the museum belong to the members. Membership in the Clemente Society is the cost of a barrel or half-barrel, and it comes with various perks. A barrel costs $12,000, and the museum gets 21 percent of the wine in each to use for fundraising. About 70 people are members.

Dozens of celebrities, including sports stars past and present, have visited the museum and wine cellar for events and have bought barrels to support the museum.

The business makes 14 varieties, which are stored in Hungarian oak barrels. The signature wine is the Clemente Cabernet.

Pirates’ catcher Francisco Cervelli apparently has a highly discerning palate, having tailored his wine from numerous tastings to get an oaky cabernet with vanilla and nectary undertones that is neither sweet nor dry. It’s swoon-worthy.

Mr. Rieder credits a Bloomfield winemaker, Nino Tolomeo, with getting him started.

“Some people don’t believe we make the wine here, but the grapes are crushed and fermented and pressed, barrel-aged and bottled, all right here,??? he said.

Museum board chair Bob Meeder, president of Pittsburgh Gateways Corp., said he saw the trouble Mr. Rieder was having during the recession, with high heating bills to boot.

“I thought of a society of memberships within his 501c3 and that we should do events,??? he said. “I think we hit on something.???

In the past six years, the museum has gone from holding 20 events to 132 events — all of them fundraisers for various organizations and for the museum.

“I’ve had a lot of good people around this table,??? Mr. Rieder said, tapping the wood tabletop where he holds private tastings. “The common thread is Roberto. Without the wine, the museum could be gone.???