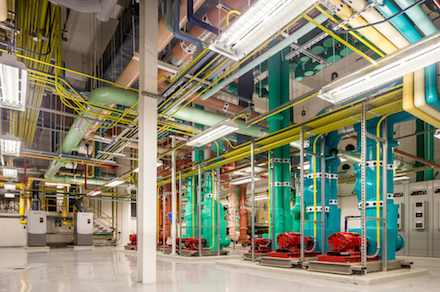 In the 20th century, Pittsburgh was at the heart of American manufacturing, providing the steel that helped build iconic structures like the Brooklyn Bridge and the Empire State Building. But when steel production almost disappeared, this city, rich with history, had to make a decision to change. Pittsburgh has since reinvented itself as a hub for energy, sustainability, and cutting-edge technology.

The EIC may be focused on the future, but it also embraces the city’s past. The center is housed at the former location of the Connelley Trade School, a 1930s-era structure that was used to teach vocational training, such as bricklaying, auto mechanics, and carpentry before it was shut down in 2004.

The Connelley Trade School, in its original form circa 1930

“Turning a historic building into a center for energy innovation comes with challenges,” said Bill Miller, vice president and COO of Pittsburgh Gateways Corporation (PGC), the strategic planning nonprofit that owns the EIC. The “adaptive-reuse” of older buildings faces a wide range of issues, including outdated infrastructure, adherence to code regulations, and, in the case of the EIC, thick walls and rampant asbestos. In addition, planners also had to adhere to historical preservation guidelines, which further complicated the design and construction process.

Despite those challenges, the EIC’s planners transformed the 80+ year-old Connelley Trade School into a “smart” LEED platinum-certified building. They leaned on external organizations, such as Siemens, to bring in the right expertise in everything from automation to HVAC efficiency.

Today, the structure produces about 60% of its electricity in-house through systems such as microturbines. The building includes three different types of chillers, as well as multiple heat sources, wind turbines, and even an ice storage farm to supplement cooling capacity. This effort has resulted in better energy efficiency and a 65% reduction in energy consumption in the building.

Jeff Zacherl from ‎Siemens said that the EIC represents a unique model for civic-corporate partnerships. “This is a really great example and platform for the private sector’s engagement. Participating in the creation of this integrated and uniquely sustainable learning environment within a historic facility is rewarding,” he said.

MODERNIZING A WORKFORCE WITH HANDS-ON TRAINING

The EIC was built around the realization that in order to modernize Pittsburgh, the skills and expertise of the city’s workforce needed to evolve as well. The center, which focuses on programs to reskill workers, was designed to be a “living laboratory.” Students and workers learn about green energy technologies by interacting with the building itself. For example, the EIC was constructed with exposed mechanical equipment, which is color-coded for training purposes so that “anyone from the operators who manage the building operations, through PhD-level engineers, can understand how optimized systems work efficiently,” Miller said.

“The connotation of someone in a blue, dirty jumpsuit with tools hanging out of their back pocket is going by the wayside,” added Miller. “These are now technicians who are equipped with smart tablets, connecting to systems electronically, and understanding and diagnosing integrated systems.”

The primary mission of the EIC is not just to prepare the workforce for changing job descriptions, but to actively boost the local—and eventually national—economy as it shifts towards green energy and sustainable building. “Our effort isn’t just to put people in seats to receive per capita revenue,” said Miller. “When we hand out graduation certifications, it’s a good day—but it’s not a great day until graduates actually get employed and we are achieving that goal with an 85% employment rate.”

WHAT’S NEXT FOR THE EIC?

Moving forward, Miller said that the EIC will be central to the advancement of the energy industry. The organization plans to expand its research beyond the EIC’s walls with another 60,000 square-foot building on campus. Its curriculum will grow as well. Future programming will train Pittsburgh locals in areas such as technical assembly, robotics, healthcare services, and building systems operations.

This continued dedication to its surrounding community is just another reason why the EIC is a great example for other cities.  “With this project, PGC wasn’t just looking to revitalize a building,” said Miller. “They wanted to create a living, breathing working environment that would help transform the city of Pittsburgh itself.”