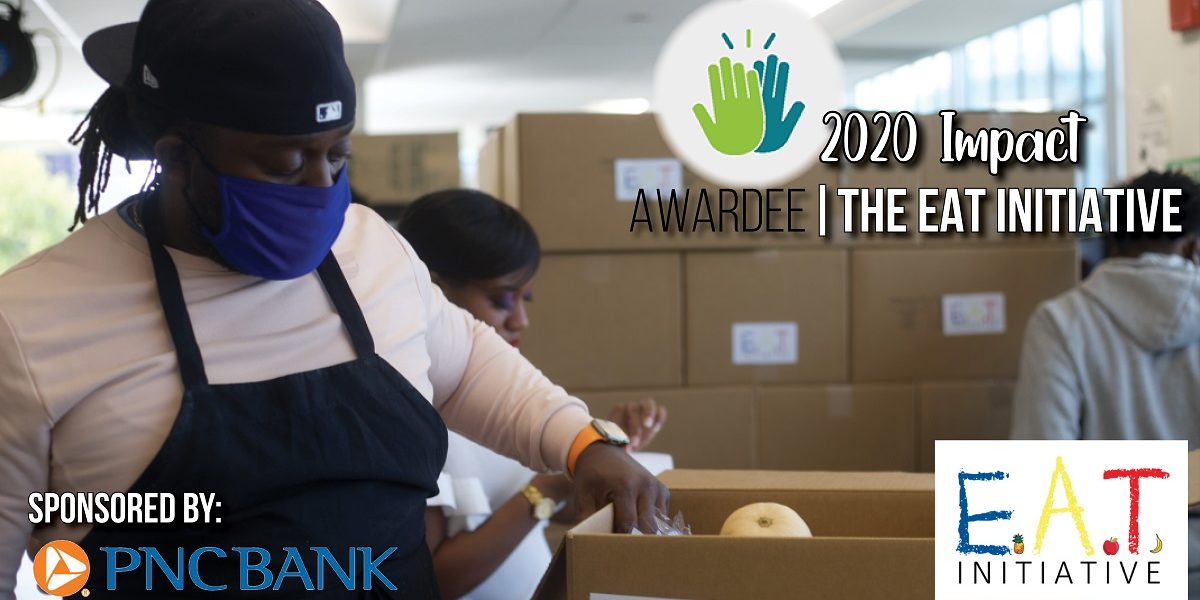 Chef Claudy Pierre of the E.A.T. Initiative was awarded the PNC Bank 2020 Impact Award by Neighborhood Allies. The 2020 Impact Award is a special honor given to an organization that has made a significant impact in its community through direct COVID-19 relief efforts or working to address ongoing issues of injustice and racism against the Black community. The E.A.T. Initiative is headquartered at the Energy Innovation Center, LP (EIC) Commercial Kitchen.

When the pandemic hit Pittsburgh and businesses began to shut down, Pierre and Pittsburgh Gateways Corporation hit the ground running. With Pierre and his team at the helm, Pittsburgh Gateways mobilized the resources and administrative support to enable food production and distribution beginning in March. The meals produced are donated to those in need in underserved communities. The people who received these meals include the unemployed, the underemployed, primary and secondary school students and at-risk seniors, all located within sixteen neighborhoods in Pittsburgh and surrounding areas. This meal production is ongoing and has produced more than 50,000 meals to date. A typical week’s production now exceeds 3,000 meals, with plans to build upon that production for the long term.

Bob Meeder, CEO and President of Pittsburgh Gateways and the EIC, says, “We congratulate Chef Claudy and his dynamic team on this award. We are honored to be providing the facilities, the administrative and development support to the many elements of Claudy’s master plan. The community impact of his work is exactly what we envisioned as the central mission of this state-of-the-art and energy efficient kitchen.”

Pierre is working with multiple community partners and elected officials to cement these efforts and transform this project into a long-term solution. In addition, Pierre was awarded a USDA federal grant that will allow him to donate nearly 300 boxes of fresh produce (which he calls ‘Blessing Boxes’) to local families on a weekly basis for the next two years. He is also creating and sharing videos to educate families on how to create delicious and healthy meals using the fruits and vegetables that come in the Blessing Boxes.

“To think we had the opportunity to donate over 50,000 meals since March has left me totally speechless; and the best part is we’re still going!” says Pierre. “It’s been such a blessing to be able to cook for my community like this, at such a large scale.”

Pierre has gone above and beyond in his efforts to feed those in need and address food insecurity in the Pittsburgh area. His Third Meal program specifically addresses the needs of school children who rely on in-person schooling for at least one of their daily meals by making food available to them even when schools are closed or are conducting virtual learning. Meals that he and his team have made at the EIC Kitchen have been distributed in over a dozen Pittsburgh neighborhoods, including Carrick, Mount Oliver, Arlington, Beltzhoover, Crafton Heights, Elliot, Sheridan, Marshall Shadeland, Manchester, Perry South, Middle Hill District, Upper Hill District, East Liberty, Garfield, Homewood and Lincoln, as well as McKeesport and into Beaver County.

About Pittsburgh Gateways
Pittsburgh Gateways Corporation’s mission is to provide strategic planning, development and direct management assistance for communities, community-based economic development organizations, research & academic institutions and private entities seeking the acceleration of technology-based businesses. Incorporated into this mission is our goal to combat community deterioration in the City of Pittsburgh and other economically distressed areas of Pennsylvania. Pittsburgh Gateways Corporation is registered as a 501(c)(3) non-profit organization. For more information, visit www.pghgateways.org/.

About E.A.T. Initiative
Founded in 2015, the EAT Initiative was birthed out of Chef Claudy Pierre’s vision to help feed and sustain food insecure communities. Since then, EAT’s primary focus has been to inject cultural competency and food education into communities in Pittsburgh and around the world. For more information, visit https://www.eatinitiative.org/.